The Dallas Museum of Art’s Framework for Engaging with Art (FEA) is based on a study of audiences that explored the preferences and behaviours of museum visitors. The study and its findings led to fundamental changes in all aspects of the DMA’s practices and programs. This has led to a dramatic growth in audience numbers with the result that the Museum is more deeply embedded in the culture of the city.

In Ignite the Power of Art, Bonnie Pitman and Ellen Hirzy describe the audience research, the framework and the ways the Dallas Museum of Art has responded by implementing new practices, facilities, events and services.

At the centre of the FEA is a segmentation that divides audiences into four fairly even categories. These four segments can be arranged on two dimensions, Sociability and Engagement, as shown in this diagram. 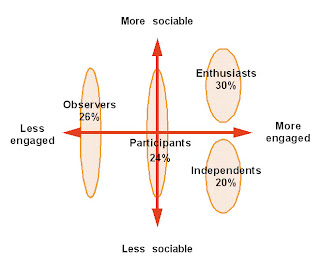 This is a really good example of how a very simple segmentation can be a powerful guide for strategic planning. As Bonnie Pitman says,

With the Framework for Engaging with Art as a tool for continued learning, we are blending a renewed understanding of visitors' distinctive qualities into the culture and values of the Museum.

It is little wonder that audience numbers rise when museums adopt a visitor-centred approach. The Dallas Museum of Art provides a very effective example where this has been applied successfully.

In Mexico City, museums are THE thing to do

On Saturday I came across general-purpose feature article about Mexico City in the Sydney Morning Herald Travel section.  I read it with pleasure as John Huxley walked us along streets and in and out of various places.

I kept reading to the end because I'll be visiting Mexico City in July!

It was only after I finished the article that I realised the only places he discussed were museums and heritage sites. Maybe that is all there is to Mexico City or maybe Huxley is a museum geek. Or maybe museums are THE thing to do to make sense of Mexico.

The only other aspect of life in Mexico that Huxley raised was the pervading violence in Mexican history and in current society.

Maybe museums really are safe places.  Or maybe not, as Huxley notes–

For visitors to Mexico, there is no shortage of violence to be found in its museums, in the pages of its tumultuous history, in the ruins of its ancient monuments. At the Museo del Templo Mayor, in the centre of Mexico City, for example, there are blood-curdling accounts of the human sacrifices made by the Aztecs.... for four days in 1487, priests honoured their gods by ripping the beating hearts from some 30,000 captured warriors lined up four abreast for three miles.

Troksy's house museum (where he got the ice pick in the head), Frida Kahlo's house (her physical suffering), Inquisition museum (torture instruments)... and so on. I begin to see what I am in for.

Museums and heritage sites are the best places to understand Mexico's culture, including the culture of violence.

Huxley's focus on museums is another piece of evidence that museums are vital to meaning-making, culture, life and travel.

I have just ordered Lois Silverman's The Social Work of Museums which was published last year.

The EVRSIG invited Lois to visit Australia as a plenary speaker at a MA conference in the 1990s. Her focus has been on the ways that museums/galleries  contribute to physical and mental health in society.

In The Social Work of Museums, she focuses on the social role of museums and how their work relates to individuals, couples and groups. She argues that social work is the most important role of museums today. The book provides a framework that will help museums extend this aspect of their role.

In our study of families and museums, published as Knowledge Quest, we noted the high proportion of single parents among the families we studied. And we also noted the presence of 'stressed' families (struggling with loss, addiction, unemployment) who visited museums for the experience of a safe and stimulating family outing.   So we have some understanding of ways that museums contribute to the health of the community.