Goods give way to experiences

Museums around the world seem to becoming more fashionable and popular. Large new museums are opening in major cities that haven't had a strong museum culture previously and big-brand museums are sprouting offshoots here and there.

I have a theory that developed countries are becoming satiated with stuff. There is an emerging trend towards reducing stuff by buying less, re-using, recycling and making do with what you've got. A recent New York Times article,  In Recession, Americans Doing More, Buying Less, describes this trend. They report recent time-use surveys that show that between 2005 and 2008 Americans spent less time buying goods and services and more time cooking or taking part in “organizational, civic and religious activities.”

They also note the  increase in museum audiences since 2008 as part of this trend. It seems that many people are turning away from buying material goods and seeking experiences instead. In 2009, US movie audiences were up by 5% and Disney theme parks enjoyed a 3% increase in visitors the the last quarter.

This is good news for museums. Especially museums that continue to offer strong experiences of authenticity to visitors.


There are a multitude of initiatives like The Story of Stuff that support moves away from lifestyles centred on consuming goods.  Perhaps a tide has turned in developed countries as 'having' gives way to  'being' and 'doing'. This may be one of the factors behind the new popularity of museums across the developed world.

As custodians of 'the real thing', museums can lend their weight to this trend and further encourage people to engage in activities more meaningful than shopping.

The Museums and Galleries NSW report, "Guess Who's Going to the Gallery: The NSW Report" is based on  7,000 responses from 41 galleries across NSW collected between 2007 & 2010.

The research reveals that if you have 10 people standing in front of an artwork in a public gallery, it is likely that: 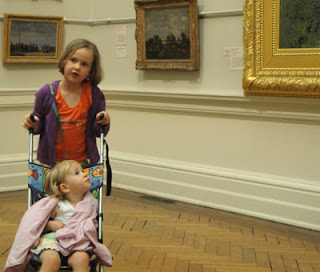 This audience description will appeal to local councils who provide most of the funding for the regional galleries that make up the bulk of this sample. They will be very happy to know that their galleries are attracting lower income people, tourists and repeat visitors. And that visitors are enjoying the experience.

The January Bulletin with news from our sector has been circulated to members, many thanks to Regan Forrest and Linda Ferguson, and to the contributors.

To get a copy, you can click on the tab  'News Bulletins' tab above to access an online copy.

Among other interesting articles, Jan Packer gives an overview of the annual Visitor Studies Association Conference in Phoenix, Arizona, in July 2010. It's good to keep in touch with activities in other parts of the world because nothing stands still.


It looks set to be a good year for the EVR SIG as we talk about how the EVR SIG can reinvigorate itself on a professional level and how we can provide more meaningful benefits for members and ways to connect with museum colleagues around Australia. Make sure you are part of these conversations – in person and online!

So, feel free to 'hang out' and exchange news and views.